In June 2008, the National Institute of Corrections (NIC) partnered with the Center for Effective Public Policy to build a system-wide framework (arrest through final disposition and discharge) that when implemented will result in more collaborative, evidence-based decision making and practices in local criminal justice systems. The purpose of their Evidence-Based Decision Making Initiative is to equip criminal justice policymakers in local communities with the information, processes, and tools that will result in measurable reductions of pretrial misconduct and post-conviction reoffending. The initiative is grounded in two decades of research on the factors that contribute to criminal reoffending and the methods the justice system can employ to interrupt the cycle of re-offense. In 2010, Eau Claire and Milwaukee counties were awarded inclusion in Phases II and III of this initiative, which involved a planning phase and then an implementation phase.

In January of 2014, NIC held a national summit in Madison, Wisconsin on the Evidence‐Based Decision Making Initiative. Co‐hosted by the Wisconsin Department of Justice, the Summit signified the beginning of the next phase of the Initiative that is envisioned to link county level efforts to state level protocols and initiatives. The purpose of the Summit was to share information with a broad group of state and local officials about the EBDM Framework. As such, the Summit addressed the importance of statewide evidence‐based decision making to achieving improved criminal justice outcomes and reducing the harm that crime causes Wisconsin’s communities. The Summit provided state and local officials with the foundational information needed to consider engaging in a statewide EBDM effort.

In February 2014, the State Criminal Justice Coordinating Council approved a motion for Wisconsin to formally apply to the National Institute of Corrections (NIC) for Phase IV of this initiative, which is focused on preparation work to gauge capacity and readiness to expand Evidence-Based Decision Making to additional local jurisdictions and on a state-wide level.  Wisconsin was one of 5 states awarded inclusion in Phase IV (along with Virginia, Indiana, Colorado and Oregon) in April 2014.

In May, 2014, work began in Phase IV.  This phase included a series of activities designed to help Wisconsin prepare itself to competitively apply for Phase V. Through the State CJCC, a planning team was assembled, chaired by the Director of State Courts and staffed by Court Operations, which also included more than a dozen state and local leaders from a wide spectrum of criminal justice system agencies. This process was a true collaboration as the planning team drew on the resources and expertise of all of the State CJCC’s subcommittees - Outreach and Communication, Problem-Solving Courts, Evidence Based Practices, and Data Sharing/OTIs.

On November 21, 2014, the state of Wisconsin formally applied to NIC for inclusion in Phase V of the EBDM Initiative.  This phase will be a planning phase that will expand EBDM to 6 additional counties in tandem with a state-level team. Chippewa, Marathon, Outagamie, La Crosse, Rock and Waukesha counties are the local jurisdictions for Wisconsin. 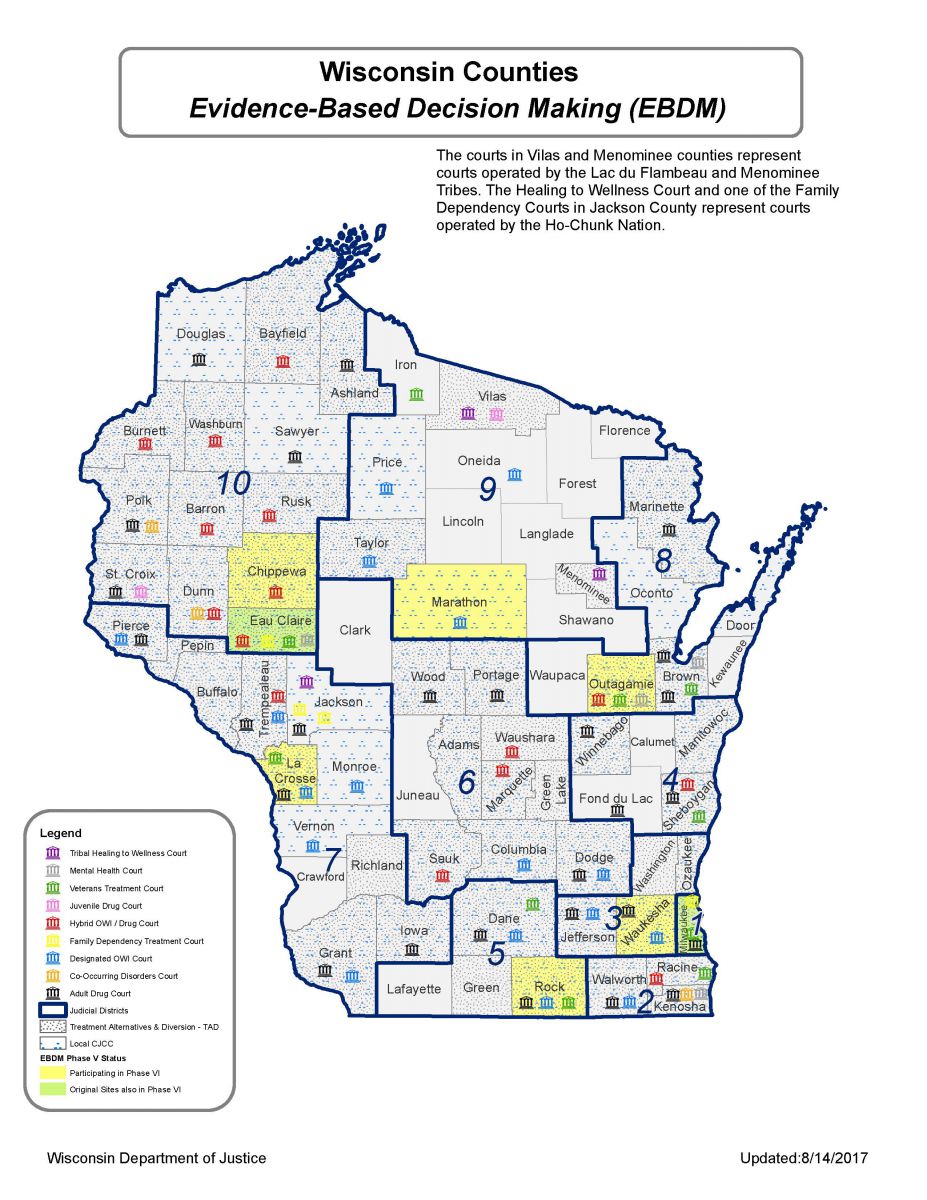 The Statewide Criminal Justice Coordinating Council’s Evidence-Based Decision Making Subcommittee will serve as the Phase V State Policy Team. On February 25, 2015, the state of Wisconsin was officially selected as one of three states, including Indiana and Virginia, to advance to Phase V of the EBDM Initiative.